-Pilot grant funding from the Center for the Molecular Biology of Neurosensory Systems COBRE.

-We are grateful for previous grant funding from the Bright Focus Foundation National Glaucoma Research Program!

Synaptic dysfunction in neurodegenerative diseases. The long-term objective of this research is to determine how elevated intraocular pressure, a major risk factor for glaucoma, influences the conveyance of visual signals from the retina to the brain. This is driven by a desire to better understand the link between elevated intraocular pressure (ocular hypertension, OHT) and neuronal dysfunction and degeneration of retinal ganglion cells (RGCs) in order to identify novel means of tracking disease progression, making earlier diagnoses, preventing vision loss, and restoring sight. In glaucoma, OHT ultimately contributes to RGC degeneration by damaging RGC axons as they exit the eye and form the optic nerve. While a substantial body of work has established the multitude of ways that OHT affects the structure, connectivity, and function of RGCs, there is a major gap in our current understanding of how OHT alters their signaling to visual areas of the brain. Neural systems employ homeostatic processes that stabilize their function in response to changing conditions such as development, learning, or disease and OHT-triggered changes to RGC and their axons in the optic nerve are likely to cause early, homeostatic attempts by the visual system to maintain function. The objective of this proposal is to test the hypothesis that OHT triggers homeostatic plasticity in the dorsal lateral geniculate nucleus (dLGN), a key region of the brain receiving visual information from RGCs. This central hypothesis will be tested with three specific aims. Experiments in Aim 1 will determine the influence of OHT on synaptic transmission by RGCs in the dLGN, testing for changes in presynaptic neurotransmitter release efficiency and post-synaptic neurotransmitter receptor composition. Aim 2 will test the hypothesis that OHT triggers an increase in neuronal excitability in the dLGN that maintains neuronal activity in response to axonal dysfunction. Finally, in Aim 3, we will determine the influence of OHT on activation of TrkB, the receptor brain-derived neurotrophic factor (BDNF) and test the hypothesis that altered TrkB activation leads to OHT-dependent changes in neuronal excitability and synaptic function in the dLGN. To accomplish this, we will employ a diverse combination of technical approaches including inducible and inherited mouse models of OHT, brain slice patch-clamp electrophysiology, optogenetics, two-photon microscopy, single-cell dendritic analyses, axonal tracer labeling, quantitative reverse-transcription PCR, and in vivo ocular imaging. Our findings will advance our understanding of neuronal and synaptic homeostasis and its mechanisms and shed light on the processes linking optic nerve injury to vision loss in glaucoma. 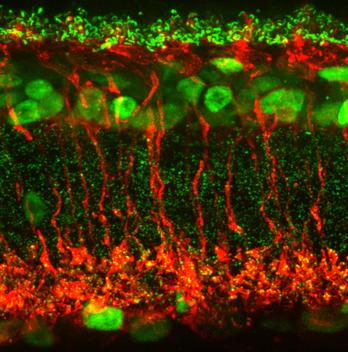